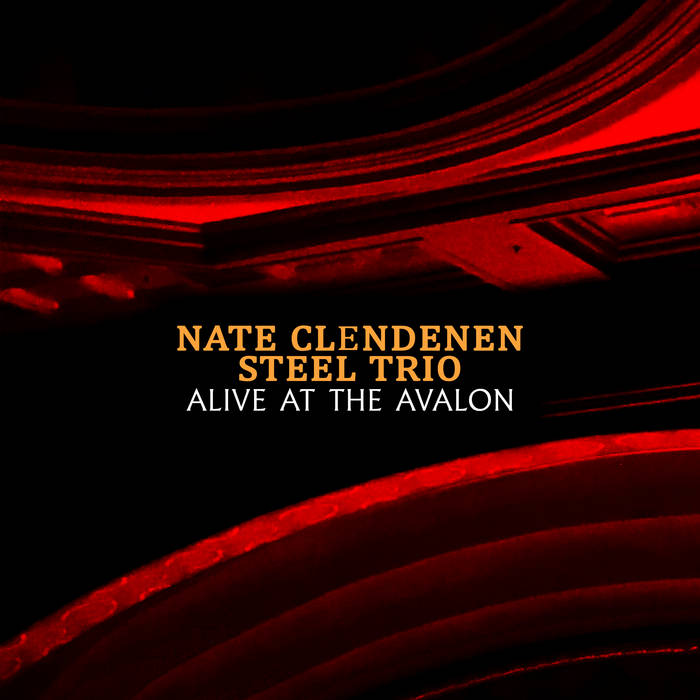 Staging the "Steel Trio" for the first time, Nate is joined by Charlie Greenhalgh on upright bass and Joe Esham on the ensemble's namesake, pedal steel guitar - both of which are fellow members of his rock/country/blues band Eastern Electric. "Steel Trio - Alive at the Avalon" features a handpicked-handful of tracks from a performance at the Avalon Theater in Easton, MD right before the new year on December 29th, 2019.

The Avalon Theater has an amazing natural resonance and the room mix ended up being the master template for the recording, backed by a multi-tracked board feed. For this reason it feels very much like being in the room for the performance, complete with a few beer bottles and intimate crowd reactions.

Fun facts...
1. The night of this performance, Nate was solidly under the weather from a holiday bug, which of course made hitting his notes a much more challenging and at times painful feet. Although the vocal performance ended up solid, he spent extended amounts of time in between songs, telling stories and jokes... no doubt exacerbated by his choice of self-medicating with a certain Kentucky-made beverage. As Nate would tell you, he has never been able to properly deliver a joke on stage... ever. Ever ever. On this night... the crowd laughed. Truly a first. The stage banter, however does not appear on this release because... well, you just had to be there.
2. Nate and the guys were there supporting the Brooklyn-based pillars of modern Americana, Yarn. Nate and the Yarn crew first crossed musical paths over a decade ago in Manhattan's Greenwich Village at bar they both used to play regularly. This show at the Avalon was the 4th time they'd been on a bill together. If you don' t know who they are... check them out immediately at www.YarnMusic.net

For more of Nate Clendenen's music, content, and info, please visit www.denenmusic.com and www.EasternElectricMusic.com, on Facebook, iTunes, Spotify, and elsewhere...

All songs by Nathan W. Clendenen (ASCAP) except "Stand By Me" by Ben E. King, Jerry Leiber, and Mike Stoller.

Photography and Design by Nate Clendenen

Nate Clendenen is an American singer/songwriter, multi-instrumentalist, and performer from the Eastern Shore of Maryland. Steeped in influences all across the board, his generational roots extend deep into the Blue Ridge Mountains, while his blood runs thick with the saltwater of his tidal home.
For more music, content, and information please visit www.denenmusic.com ... more

Track Name: Fire Left Burning (Alive at the Avalon)
Oh the fire, I left it burning
Just so you could one day find your way home
Oh the ocean, great big and wide it was a churning
Churning for you out on your own...

And all the mountains across the valley
Cry out where oh where have you been for all of my life
'Cause I've been standing like a rock out on the horizon
Watching my days pass me by
Yes I've been watching my days just past me by...

So the fire, it burns no more
From too many years of trying to let go
Of the one thing that kept me going through all this last time
It was you, the thought of you coming home
Yes it was you, why didn't you come on home...
Track Name: So Long (Alive at the Avalon)
Well it seems the cold has set in early
Fair summer where have you gone
I don't know which way that I am going
Don't even which way to go on the road I'm already on

What would I do if I was still in love with you
Would you be right here right now
What would I say if you were right with me today
But you're not and I've got is so long...

Well I say my time is not for the wasting
But I've been wasted for so damn long
Feels like my sun is always sinking down
I'm always singing some sad song...

What would I do...
Track Name: Cold off the Water (Alive at the Avalon)
Well the wind blows cold
Coming off of the water
In the darkest days of late December
It's solstice and I'm trying to remember

You can't hold on to something
That won't stop moving
You can't keep playing a game
That you won't stop losing
Two words I never wanted to say to her
Goodbye Jennifer...

I gave you my soul
And you read my story true
You even let yourself write a chapter or two
Now tell me what is a man like me to do
Except sit up here and sing these words to you
Track Name: Life Ain't a Game (Alive at the Avalon)
She could've had the world
But she went and lost it in a card game
Baby you should know by now
You can't win with a losing hand
Like it or not it's all gonna end the same
And winning alone, it don't make you a man

Since you've been gone and I've been here
I ain't missing you no more my dear
I don't know how much how hard or why I tried
Win or lose it's all gonna end the same
baby you should know by now that life ain't a game...

Since you've been gone...

Bandcamp Daily  your guide to the world of Bandcamp

Featuring Gary Bartz, 5 years of Rhythm Section Intl and an LP of the week by Nicolas Jaar